This fridge magnet history is provided by Wikipedia, the free encyclopedia   (Redirected from Fridge magnets) 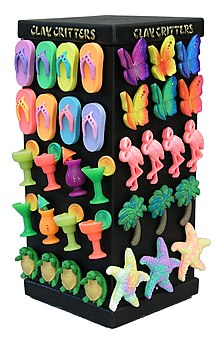 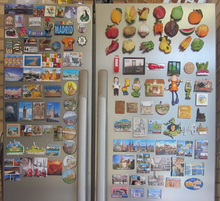 A collection of refrigerator magnets. 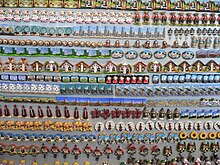 The first fridge magnets were cylindrical or solid rectangular magnets. Later, a flexible magnet was developed, composed of a high-coercivity ferromagnetic compound (usually ferric oxide) mixed with a plastic binder.[4] This is extruded as a sheet and passes on a conveyor belt over a line of powerful cylindrical permanent magnets. These magnets are arranged in a stack with alternating magnetic poles facing up (N, S, N, S,…) on a freely rotating shaft. This impresses the plastic sheet with the magnetic poles in an alternating line format. No electromagnetism is used to generate the magnets. The pole-pole distance is on the order of 5 mm, but varies with manufacturer. Ferritemagnets are commonly used, too, with decorative elements attached to the magnets with adhesive. They were created in the 1920s.[5] 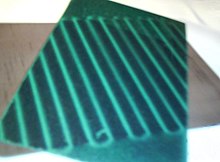 Unlike most conventional magnets that have distinct north and south poles, flat refrigerator magnets are magnetized during manufacture with alternating north and south poles on the refrigerator side.[6] This can be felt by taking two similar (or identical) refrigerator magnets and sliding them against each other with the “magnetic” sides facing each other: the magnets will alternately repel and attract as they are moved a few millimeters. One can note that magnetic field outside a uniformly magnetized thin sheet is actually zero, neglecting the edge effects (see, for instance, D. Budker and A. Sushkov, Physics in Your Feet”, OUP, 2015), so a uniformly magnetized magnet does not stick to a refrigerator. Most magnets have a special, slightly more sophisticated magnetization pattern called a Halbach array. This construction gives enhanced magnetic field on one side and almost zero magnetic field on the other. 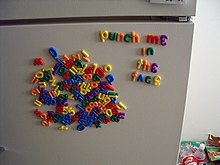 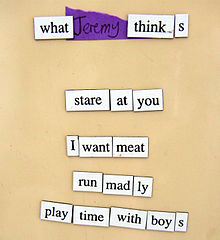 Magnetic poetry about a domestic cat

Collecting magnets is a hobby, with some collectors specializing in magnets from their travels, or of a particular theme.[7] They are sold at souvenir shops worldwide. There is no generally recognized term (e.g. numismatics for currency collecting) for magnet collecting. A Russian collector has proposed the term memomagnetics (Russian: мемомагнетика), derived from the words memoriale (Latin) and magnetis (Greek)[8] A collector of magnets would be called memomagnetist. These terms have been used by at least one Russian online community for magnet collectors.[9]

According to Collector’s Lot magazine, in March 1999, Tony Lloyd of Cardiff, Wales, coined the term “thuramgist” for a “collector of fridge magnets”.

Fridge Magnets on a board – Private Collection

Now that you know the fridge magnet history would you like to purchase them for your business marketing?
We can cut out any shape and make any size fridge magnets. Suitable for sticking onto door frames, refrigerators, PC’s, whiteboards or any metal surface. Ourfridge magnets are extremely well priced and of the highest quality. Get more mileage from your promo item marketing spend.

Most homes in South Africa have a fridge. They hold up children’s precious artwork, photos, shopping lists, memos etc. Magnets printed with calendars, sport schedules, important phone numbers, kitchen conversions, save the date info, advertising info etc. are kept on the fridge for the useful information they offer. How often will they be seen? Let’s assume the average South African family opens the refrigerator 10 times a day. (A very conservative estimate) This means the average family of four will see your magnet:

1000 fridge magnets would result in 14.6 million views per year! That is massive exposure for a relatively low cost.

Shape up your business promotion with our Shaped Magnets! By making the magnet into a custom shape you can make your company logo instantly recognizable. You could also make a shape depending on your industry. For example estate agents could use a house shape or a delivery company could use a delivery truck shape.

Doming is a process where resin is added onto the magnet to give a 3D lens effect. This does add to the price however the effect is stunning.  See www.promoplus.co.za  for more information on doming.

Simply send us an email to sales(at)geckomedia.co.za and we will respond immediately. To help speed up the quote process, please include the following in your email: